Exactly three years ago today, I crossed the finish line at Ironman Arizona 2017.  I just got my Ironman tattoo (more than one!) last week.  The big eyes on the goldfish are like mine when I was learning to swim: wide with fear and anticipation!  The black cat is my favourite animal.  It is curious, intrigued, and reaching for the swimming goldfish with desire just like I wanted to become an Ironman so intensely.

Here's why I waited and why NOW is the perfect time to get it.

When I crossed the finish line, I was the happiest I had ever been.  I thought I was healthy and that I had embraced healthy habits as part of an active lifestyle.  I had been pushing myself past my comfort zone and endurance limits and just never kept it up.  I put a lot of things off like doctor's appointments so that I could just get to the finish line.  More on that later.  After Ironman:

2020 started off with end of days type chaos including fires, Covid-19 pandemic and lockdowns, school and business closures,  a scramble to find a vaccine, the impeachment of a US president, a stock market crash and worldwide recession, Black lives matter protests, murder hornets, explosions in Beirut and Lebanon, a cyclone in India, a plane crash in Pakistan and India, horrific conditions revealed with high rates of Covid transmission and resulting deaths in long term care homes in Canada, release of prisoners to reduce the risk of transmission, an earthquake in Mexico, a landslide in Myanmar, typhoons in Asia.  Sources: NYT and Wikipedia

On the personal side, just after turning 50, I was informed that I had cancer this January.  I wasn't too surprised since about 40% of us will get cancer of some sort in our lifetimes.  I went in expecting to have Moh's surgery (where thin layers of skin are removed and examined under a microscope until all the cancer cells are removed with "clear margins") for a mole on my back, just to be told to lie on the operating table and prepare for wide local excision (like gutting a turkey and stitching up the neck) for an in situ (stage 0) Melanoma that left a 2 inch scar on my back.

Next I found out I had a second melanoma after a biopsy on a pink itchy mole on the outer edge of my ear that I had mentioned a few times but was so atypical that it was dismissed a few times.  It was amelanotic (no black or brown colour) and raised (nodular not superficially spreading).  I was told to prepare to lose a one or two inch margin all around that.  Well, that would be the whole bottom half of my ear.  My family joked that they would love me even without ears and that I didn't need ears since I never listen anyway.  Thankfully I ended up with both a cancer surgeon and plastic reconstruction specialist so my ear looks pretty normal now almost a year later.  The lobe is thick and full of scar tissue.  I don't think I will bother getting it re-pierced because I don't want more trauma to the area or anything heavy dangling off of it.  They removed three lymph nodes from my neck to be sure it hadn't spread to stage 3.  Thankfully it hadn't and was therefore a stage 2 cancer.

That's "just skin cancer" right?  Melanoma is a more serious and deadly form of skin cancer than non-melanoma skin cancers like Squamous Cell or Basal Cell Carcinomas.  Now I get my skin checked every 6 months.  Melanoma is rare.  Melanoma on the ear is rare.

My amazing Ironman / photographer friend Keith took some super photos of me in May for Melanoma awareness month.  The Calgary Tower was lit up that night in honour of it.  I wanted to do something positive, and I love the photos so much they became my profile and banner pics on social media.

I already have Celiac disease, ended up with IBS in my last year of Ironman training (maybe from all the hurried ongoing ravenous eating, snacking and rushing), developed painful GERD/reflux which is better ow, and tenosynovitis in my wrist and thumb from all the intense keyboarding that comes with working to support online learning.  It started in January, I started treatment in February, everything was closed for months so I was unable to get treatment or an official diagnosis.

There were days I didn't want to get out of bed it was so painful and I felt so depressed and useless having to ask my family to do the laundry and cook while I couldn't hold my toothbrush or coffee mug unless I used both hands.  They reminded me that we all take care of each other and the measure of my own worth is not just by what I "do" or accomplish and that I do lots for them too.  I bought braces, iced, took ibuprofen and more. When I was able to get treatment after the lockdown lifted, I needed a steroid injection.  Work got me dictation software when it got really bad in September and it's going better with all of those accommodations.  I still baby it and worry that I might not be able to lift the puppies.

I feel like the brand new car I have been driving carefully and giving premium oil changes to just gave out and the timing belt broke after this many miles.  So now what?  I don't need to live like I will live to be 150.  It's time to lease or rent with an option to renew ever ten years.  It's time to go for a long drive in the countryside and get out of the city traffic with all the rules to obey and dangers and cautions to avoid.  It's time to find balance and just be and enjoy life every day.

Less than 1% of the population finishes an Ironman so that is rare too.  I did it to remind me that I am stronger than I think, capable, resilient and determined when I am worn down, exhausted and full of self-doubt.  Now it's time to bring that reminder forward front and center.  It's time to get that puppy and get that tattoo!

Since I was in my teens, I listened to those who cautioned me to think before I ink, to wonder what a faded tattoo would look like on wrinkled, saggy, stretched, veiny skin, and wonder if I would regret it.  Nope.  I wanted to get it done when I found out I had cancer but I had to wait until I found an artist I liked whose books were open (taking new clients) and then for the lockdown and closure of tattoo studios that started in mid-March to be over.  In fact, now that I still want it now that I am a little more of all of those things that come with being older and more comfortable in my own skin, I got the exact on I tattoo I designed over three years ago: thin lines, negative space and watercolour effect on my ankle to remind me that I am strong even when I feel weak. (You can see my sketch in Part 6 linked below).  Mind over matter.  Anything is possible.

Oh and that scar on my back?  It looks much better now.  And I got a funny cat scratch tattoo on it too and a maple leaf on my wrist because I'm Canadian, a black ribbon (for Melanoma) behind my ear, a sun on my foot to remind me that after every long dark winter comes a warm sunny spring or a trip to a sunny vacation destination, and a dragonfly because I love their freedom, flight and iridescence.  These photos were taken right after the tattoo session, before they were wrapped up for healing.

This week, when I got my "all clear" skin check, my dermatologist said she liked my cute colourful tattoos and agreed that sometimes you just have to go for it.  I was prepared to hear that tattoos make melanoma detection more difficult and say that I accepted the risks.  I was happy that she was positive and said that the risk is more on larger blacker tattooed areas.  Either way, I'm finally comfortable in my own (imperfect) skin and looking for happiness in each and every day!

Popular posts from this blog

6 months after Ironman - Now what?

May 14, 2018
November feels like a long time ago.  We had a long, dark, cold, snowy, endless winter and now it's spring.  I never did get a tattoo and I'm glad.  I am working hard at finding balance and have stepped out of the Ironman athlete persona into the regular everyday wife/daughter/friend persona. I felt like doing nothing after my race but didn't beat myself up over it.  I anticipated needing 6-8 weeks of doing nothing to recover but it took longer than that for me.  I hibernated and rested on my laurels while becoming sedentary and and ingesting more calories than I was putting out. Swimming I had set a tangible, measurable goal to swim faster and Keith was helping me.  Then hubby asked me to stop getting up at 4:30 in the morning on weekdays to swim before work.  I acquiesced, deferred my goal and now only swim on Sundays.  The pool will be there for me always and I will revisit my goal when life changes again to allow for it.  I supported him when he was going through c
Read more 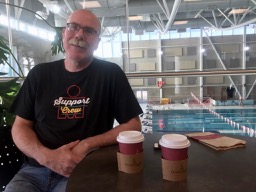